One definition of justice is “giving to each what he or she is due.” The problem is knowing what is “due”.

Functionally, “justice” is a set of universal principles which guide people in judging what is right and what is wrong, no matter what culture and society they live in. Justice is one of the four “cardinal virtues” of classical moral philosophy, along with courage, temperance (self-control) and prudence (efficiency). (Faith, hope and charity are considered to be the three “religious” virtues.) Virtues or “good habits” help individuals to develop fully their human potentials, thus enabling them to serve their own self-interests as well as work in harmony with others for their common good.

The ultimate purpose of all the virtues is to elevate the dignity and sovereignty of the human person.

While often confused, justice is distinct from the virtue of charity. Charity, derived from the Latin word caritas, or “divine love,” is the soul of justice. Justice supplies the material foundation for charity.

While justice deals with the substance and rules for guiding ordinary, everyday human interactions, charity deals with the spirit of human interactions and with those exceptional cases where strict application of the rules is not appropriate or sufficient. Charity offers expedients during times of hardship. Charity compels us to give to relieve the suffering of a person in need. The highest aim of charity is the same as the highest aim of justice: to elevate each person to where he does not need charity but can afford to become charitable himself.

True charity involves giving without any expectation of return. But it is not a substitute for justice.

Social justice encompasses economic justice. Social justice is the virtue which guides us in creating those organized human interactions we call institutions. In turn, social institutions, when justly organized, provide us with access to what is good for the person, both individually and in our associations with others. Social justice also imposes on each of us a personal responsibility to collaborate with others, at whatever level of the “Common Good” in which we participate, to design and continually perfect our institutions as tools for personal and social development.

Economic justice, which touches the individual person as well as the social order, encompasses the moral principles which guide us in designing our economic institutions. These institutions determine how each person earns a living, enters into contracts, exchanges goods and services with others and otherwise produces an independent material foundation for his or her economic sustenance. The ultimate purpose of economic justice is to free each person to engage creatively in the unlimited work beyond economics, that of the mind and the spirit.

The Three Principles of Economic Justice 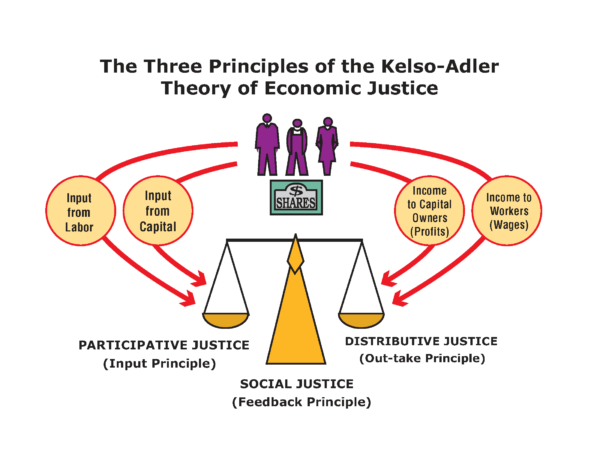 “Participative Justice” describes how each of us makes an “input” to the economic process in order to earn a living. It requires equal access to the means (through social institutions such as our money and credit system) of acquiring private property in productive assets, as well as equal opportunity to engage in productive work.

The principle of participation does not guarantee equal results. It requires, however, that every person possess the equal human right to participate in/contribute to the production of marketable goods and services — through one’s labor (as a worker) and/or through one’s productive capital (as an owner). Thus, this principle rejects monopolies, special privileges, and other exclusionary social barriers to the full participation and economic self-reliance of every person.

“Distributive Justice” defines the “output” or “out-take” rights of an economic system matched to each person’s labor and capital inputs. Through the distributional features of private property within a free and open marketplace, distributive justice becomes automatically linked to participative justice, and incomes become linked to productive contributions. The principle of distributive justice involves the sanctity of property and contracts. It turns to the free and open marketplace, not government, as the most objective and democratic means for determining the just price, the just wage, and the just profit.

Distributive justice follows participative justice and breaks down when all persons are not given equal opportunity to acquire and enjoy the fruits of income-producing property.

“Social Justice” is the “feedback and corrective” principle that detects distortions of the input and/or out-take principles and guides the corrections needed to restore a just and balanced economic order for all. This principle is violated by unjust barriers to participation, by monopolies or by some using their property to harm or exploit others.

Economic harmony results when Participative and Distributive Justice are operating fully for every person within a system or institution. The Oxford English Dictionary defines “economic harmonies” as “Laws of social adjustment under which the self-interest of one man or group of men, if given free play, will produce results offering the maximum advantage to other men and the community as a whole.” Social Justice offers guidelines for controlling monopolies, building checks-and-balances within social institutions, and re-synchronizing distribution (out-take) with participation (input). The first two principles of economic justice flow from the eternal human search for justice in general, which automatically requires a balance between input and out-take, i.e., “to each according to what he is due.” Social Justice, on the other hand, reflects the human striving for other universal values such as Truth, Love and Beauty. It compels people to look beyond what is, to what ought to be, and continually repair and improve their systems for the good of every person.

It should be noted that Louis Kelso and Mortimer Adler referred to the third principle as “the principle of limitation” as a restraint on human tendencies toward greed and monopoly that lead to exclusion and exploitation of others. Given the potential synergies inherent in economic justice in today’s high technology world, CESJ feels that the concept of “social justice” is more appropriate and more-encompassing than the term “limitation” in describing the third component of economic justice. Furthermore, the harmony that results from the operation of social justice is more consistent with the truism that a society that seeks peace must first work for justice.