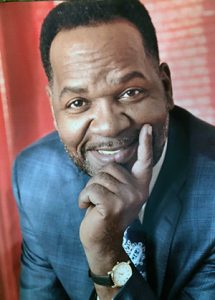 Gene Gordon is Founder and Executive Director of Descendants of American Slaves for Economic and Social Justice, headquartered in St. Louis, Missouri.

Born and raised in St. Louis, Gene never attended college, nor did he end up in prison. Gene believes that people are measured by how close they are to the poor and the disenfranchised, and how well they help others overcome systemic challenges and barriers that prevent people from accomplishing their dreams and aspirations.

As President and Partner of Direct Source Maintenance, a Facility Service Management company, Gene and his team offer a broad range of services such as “green” cleaning, construction management, build outs, additions, and urban development. The company’s website, directsourcefsm.com, provides more information on their full line of services.

Gene Gordon serves on the Board of Directors of the global Center for Economic and Social Justice headquartered in Arlington, Virginia. CESJ is headed by Dr. Norman Kurland, a pioneer in expanded ownership institutions and laws. His accomplishments include designing the initial Federal ESOP laws for worker ownership and working with community leaders in Central Harlem in the late 1960s and in East St. Louis from 2000-2009 to introduce mechanisms for equal citizen ownership of community land.

Under Gene Gordon’s leadership and in partnership with CESJ, Descendants of American Slaves for Economic and Social Justice has launched The Heart of America Project. Gene and his CESJ colleagues convinced Missouri State Senator Karla May to introduce SB460, which would create a model for-profit Community Investment Corporation, a citizen-owned land development corporation, in St. Louis and surrounding areas. In March 2021 Gene Gordon testified in support of the bill before the Missouri Senate Oversight Committee. This groundbreaking model would demonstrate at the community level how the 12 regional Federal Reserve Banks (starting with the St. Louis Fed), commercial banks and private insurance companies could finance sustainable economic growth, while creating equal capital ownership opportunities for every citizen.

The Heart of America Project introduces a series of monetary and tax innovations targeting the systemic causes of poverty, racism and the growing gap in wealth, income and opportunity. If successful, this model will be replicated throughout the U.S.

Through his life, Gene has always believed that there are three sides to any coin. He believes in the ability to think independently, outside the box. Being the person he is, he knows that what is right is not always popular, and what is popular is not always right. [Cf. Fulton Sheen, “Right is still right if nobody does it, wrong is still wrong if everybody does it.”]

Gene Gordon has spent his life on the front line working with organizations, community leaders, and activists to lift the systemic barriers and challenges that plague communities today. Despite adversity and personal tragedies, Gene has remained positive, steadfast and hopeful that effective change will correct the economic and social injustice that fosters crime within communities.

When Gene was introduced to the work of the Center for Economic and Social Justice, he felt that “This Is It” – a solution to the problems that Americans and people throughout the world face today. CESJ’s “Just Third Way” recognizes that unjust and exclusionary systems and policies have created barriers that are maintained by leaders who are disconnected from community life. To dismantle those barriers, people must organize to change systems and policies to provide equal opportunity, access, power and justice for every person. To that end, Gene Gordon has worked every day to spread the ownership message and solutions to leaders and ordinary citizens alike.