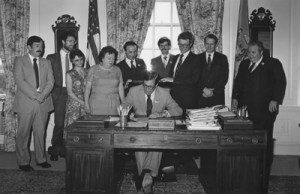 Standing behind Governor duPont, from left to right:

Luis Granados III, Washington Counsel of the ESOP Association of America, co-authored report on ESOP for Norman Kurland & Associates for State of Delware

The Descendants of American Slaves for Economic and Social Justice is a non-profit 501(c)(3), all-volunteer educational center, grassroots think-tank and social action catalyst established in 1984 to advance liberty and justice for every person through equal opportunity and access to the means to become a capital owner.